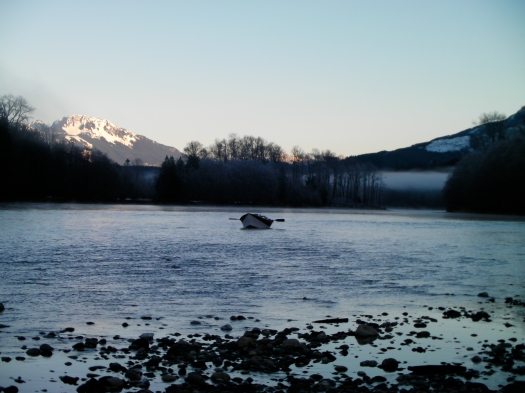 The great fly fishing website, Midcurrent.com, recently published an essay I wrote for an essay contest sponsored by the American Fy Fishing Tackle Association. Here is the link.

There are no giant barracuda in Hawaii. At least that’s what the passing ocean kayaker yelled as I battled a three-foot, toothy monster behind the coral reef off Maui’s south coast. Obviously, no one bothered to tell the barracuda that took my baitfish fly like it was his last supper. Lucky for that fish, I caught and released it, but only after removing a two-pronged live-bait hook squarely set into the fish’s jaw – the last angler had dinner plans.

Warily, I held the barracuda’s tail, measured the fish as it resuscitated and watched the Pacific Ocean sunset reflect in the grateful fish’s glassy eye. As the barracuda swam away, that same kayaker declared confidently that he’d, “Lived in Hawaii twenty years and never saw another fly fisherman.” I knew I wasn’t the only fly fisher drawn to that island’s warm waters.

Like many anglers before me, I hit the beach to temporarily escape daily life and return reinvigorated. It was 2008, I lived in Seattle, Wash., and a Pineapple Express rainstorm threatened to bring even more watery gloom to the normally damp and dark northwest. Worse than weather, I stared down the barrel of middle age and would soon turn 40. Half-panicked, I packed the Winston 8 weight and fled for Maui, Hawaii. There I found big fish on the fly, acres of cast-crippling wind and new inspiration to help preserve my home fisheries.

Even before that long-ago Maui adventure, I learned freshwater and salt were inseparable while Spey casting for steelhead on famed Washington rivers, such as the Skagit and Hoh. That ocean connection wasn’t obvious growing up in Arkansas fly fishing for tailwater trout. Only fishing for anadromous steelhead on the West Coast taught me that protecting those famed freshwater fighters depended in part on healthy oceans.

Working in a Seattle fly shop, I met accomplished steelheaders and marveled at their tales of chasing the “fish of a thousand casts.” Sadly, I learned the moniker comes because there are so few steelhead, not because they’re difficult to catch. In fact, Puget Sound steelhead were listed as threatened in 2007. Today, wild steelhead returns are meager compared to their past numbers.

Ask a hundred anglers why so few wild steelhead return from the ocean each year, and you get a hundred different answers. That’s because the steelhead’s demise doesn’t have a single, simple cause. Whether habitat destruction or overfishing, ocean warming or gill netting, water quality or hydroelectric dams, those fish are nearly extinct as a wild, self-sustaining population in Washington State. Even Columbia River steelhead and salmon returns are at a 10-year low, with only 1.1 million fish estimated to return where once up to 16 million fish filled the river and its tributaries yearly. If changes don’t come, we may be fishing for fossils.

Dire details are too familiar. My angling life has been a world of “used-to-bes” and “should-have-been-theres.” When I started fly fishing 30 years ago, fish stocks globally were unhealthy and getting worse. Today, even hatchery-raised trout on Arkansas’ White River, where I work as a fly guide, are no longer as large or plentiful. True, a record 39-pound brown trout was caught here in 2015, but such fish are rare. In fact, in 2017 the state increased the brown trout length limit to 24 inches, always a sign of fewer quality fish.

Unfortunately, there are as many threats to the oceans as there used to be fish in the sea. Recent tales range from an Indonesian whale killed by eating plastic, to Puget Sound killer whales starving because Chinook salmon are nearly gone. In Florida, green slime and red tides kill fish and foul beaches, while invasive lion fish overtake reefs.

Elsewhere, a continent-sized plastic garbage island grows daily in the Pacific. Add to that threats from overfishing, water pollution, as well as ocean-absorbed CO2 causing coral to literally melt, and the future looks grim for fish and fly fishers. There’re no easy answers, but awareness is the first step, like knowing barracuda prowl Hawaiian waters.

John Muir saved Yosemite by leading people into that wilderness, allowing the landscape’s beauty to demonstrate why it deserved preservation. Today, human behavior threatens oceans and fisheries worldwide. Yet, we cannot save seas or home waters without understanding those dangers through first-hand human encounters. By simply taking another person fishing, fly guides can instill a 21st-century conservation ethic, helping others discover the inseparable link between humans and the planet’s waters and fish.